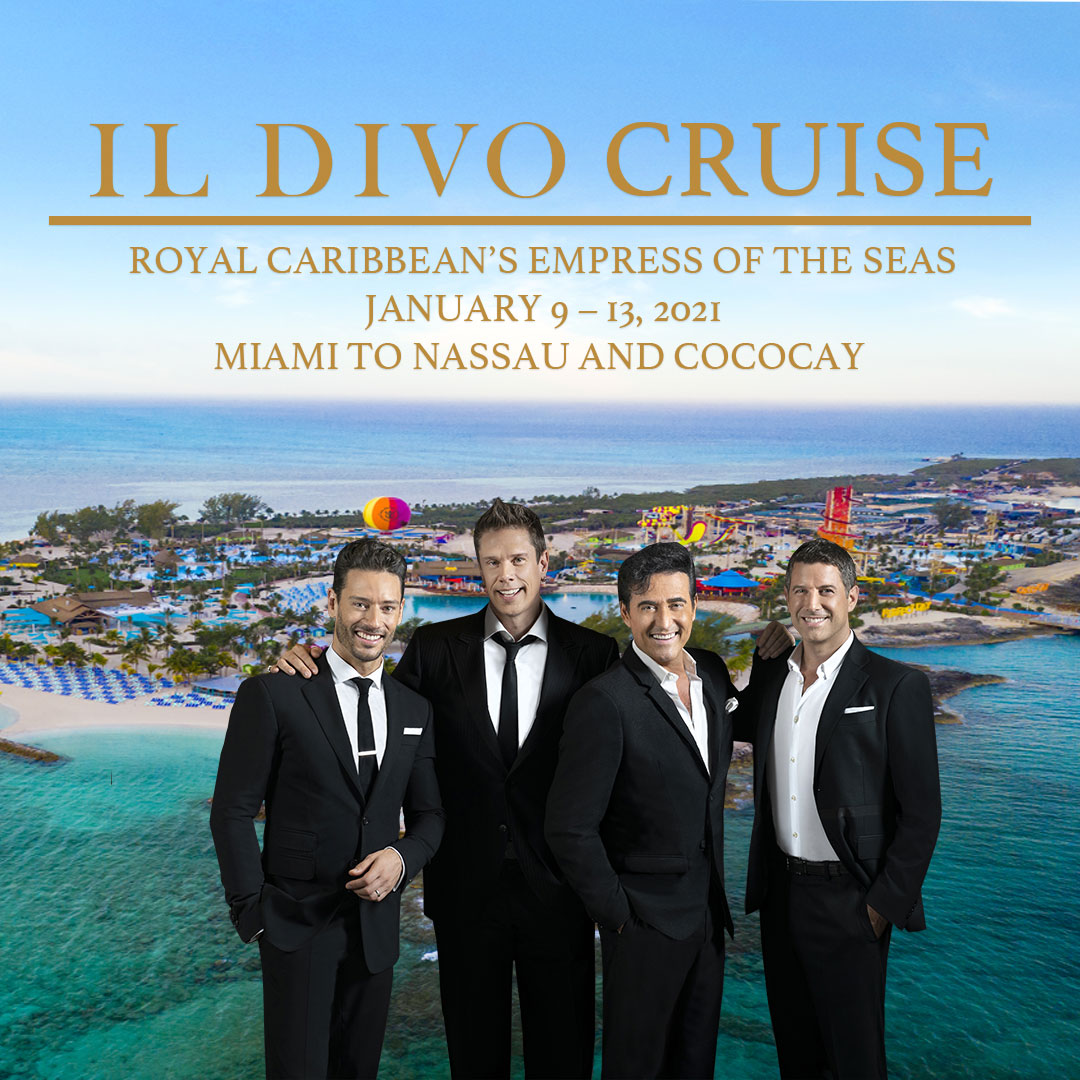 Urs, Carlos, Sébastien and David welcome you to join us for a one-of-a-kind Il Divo cruise aboard a luxurious ship!

Setting sail form Miami on January 9 – 13, 2021, the Il Divo Cruise will take us to Nassau and a Perfect Day at Cococay. Following a $250 million transformation, Perfect Day is the ultimate combination of thrill and chill. This unrivaled private island, only available to Royal Caribbean guests, provides an array of distinct adventures and iconic features from, the tallest water slide in North America, Daredevil’s Peak to Oasis Lagoon, the largest freshwater pool in the Caribbean — one-of-a-kind experiences that will top any bucket list.

Activities will include performances, an exclusive photo opportunity and Q & A with Il Divo.

Check out www.ildivocruise.com for all prices and details.

See you on board!

Il Divo’s global 15th Anniversary “TIMELESS” tour kicked off in Mexico on April 26th and by the end of 2018 the group will have performed in the US, China, Russia, Japan, Australia, Europe, Latin America and South Africa.

TIMELESS marks the first time that executive production has been under the auspices of Il Divo’s four members who curated the song selections. The songs are a classic mix of favorite pop and traditional standards in four languages including “Hola,” “Love Me Tender,” “What A Wonderful World,’ “Smile,” “All Of Me,” and “The Way We Were.” As Carlos Marin explains, “We chose songs that have a timeless quality, many of which were part of classic movies, including “Smile,” which was in Charlie Chaplin’s film, “Modern Times” in 1936 and was a song for which Chaplin composed the music.”

TIMELESS was produced, mixed and mastered by Alberto Quintero, a spanish producer who has worked with Il Divo on several previous recordings and also served as arranger on the recording which features a 60-piece orchestra. “This album represents our tribute to the eternal nature of all music,” adds David Miller.

The six continent TIMELESS tour will be an incredible fan experience of the new album and Il Divo’s extensive catalog of song interpretations and will feature a dramatic and evocative production that will include dancers, acrobats and video elements. Sebastian Izambard commented, “I am very proud of this record and we cannot wait to bring it to life on stage and we hope that everyone who comes to our shows has as much fun experience songs from Timeless as we had recording them in the studio.” The Fall 2018 leg of the tour will include
performances in Madrid, Budapest, Tokyo, Shanghai, Sydney, Moscow and Pretoria with U.S. tour dates to be announced soon.

Simon Cowell, credited for Il Divo’s inception, was inspired to create a contemporary multi-national tenor vocal group after the original The Three Tenors (Luciano Pavarotti, Jose Carreras and Placido Domingo). The end result was the genre creating formation of Il Divo, where operatic and contemporary pop vocals and repertoire were joined to pioneer a new sound. In 2006, the Guinness Book of World Records listed Il Divo as the most commercially successful, classical crossover group in international music history, a standing that Il Divo still currently enjoys since they first came together in 2003. “For the past 15 years, Il Divo has embraced a wide variety of songs and genres and made them our own and Timeless is an all-out tournament to our musical legacy on the occasion of this anniversary milestone,” commented Urs Buhler.

« Timeless Tour Australia Il Divo is returning to sea in 2021! »

We are happy to let you know the dates of our Timeless Tour that we will performing in Australia in October 2018.

May 11, 2018 (New York, NY) – First discovered and mentored by Simon Cowell 15 years ago, IL DIVO has evolved into the pre-eminent tenor powerhouse vocal group with over 30 million albums sold, 160 gold and platinum albums in 33 countries to their credit and were the first Classical Crossover artists to have an album debut at #1 on Billboard’s Top 200 chart.

The album’s first single, “Hola” was released today and is a Spanish language version of Adele’s hit single, “Hello.”  Il Divo’s global 15th Anniversary “TIMELESS” tour kicked off in Mexico on April 26th and by the end of 2018 the group will have performed in the US, China, Russia, Japan, Australia, Europe and Latin America and South Africa.

We’re pleased to announce our Castles and Country Tour.

We’ll be performing at some of the UK’s most Beautiful Castles & Outdoor Locations in July 2018, including the incredible Greenwich Music Time Festival in London!